Proud to be featured on-stage in the 2016 Apple WWDC keynote! 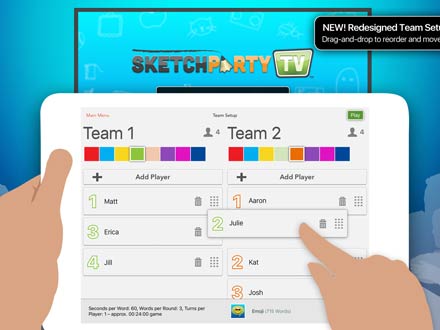 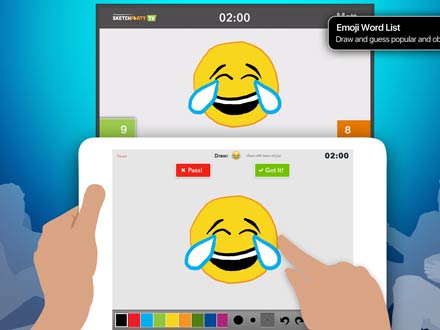 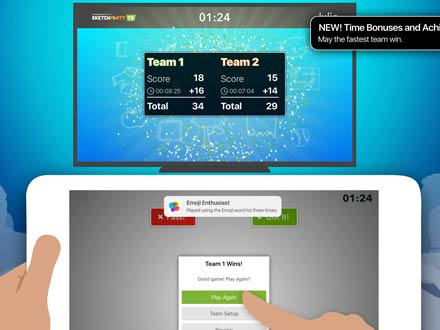 SketchParty TV is the fun, family-friendly party game for the Apple TV, originally released in 2012. It brings a high-tech Pictionary-style game to iPad and iPhone owner’s HDTVs through the magic of AirPlay.

Both the iOS app and Apple TV app have been completely redesigned. The iOS app pairs simply with the Apple TV app over a Wi-Fi network. AirPlay Mirroring is still supported, along with cabled HDMI adapters and third-party AirPlay apps like Reflector.

Great for parties, family gatherings, and events, SketchParty TV offers hours of replay with a standard word list of more than 1000 words. With the Custom Word List editor it’s also an exciting addition to the classroom, and is recommended by Tony Vincent, a world-renowned educational technology consultant and teaching conference speaker.

If you have an Apple TV and an iPad, you’ve got to try playing Sketch Party TV with your class. It’s a Pictionary-style drawing and guessing game. The app keeps score and tells you whose turn it is to draw. While it is advertised as a party game, teachers can input vocabulary words and play as a really fun way for the class to review.

SketchParty TV is a truly social game, and brings back the fun and togetherness of game night in a new, high-tech way. Available as a Universal app for $5.99 (about the same as many Apple TV movie rentals), SketchParty TV is fun to play at impromptu gatherings or to plan a party around.

I made SketchParty TV to bring families and friends together the way game night used to for so many, and to do so with Apple technology. SketchParty TV is a truly social game: instead of playing over the Internet, you can enjoy a shared, in-person experience.